The Bottomless Pit is a prison for the fallen angels, including Satan himself . . . "the angel of the bottomless pit".

God, being 'omnificent', knew Satan and one-third of the angels would try to take over Heaven (Other Earth), and thus the Bottomless Pit was waiting; and like a 'flash of lightning' Satan and his angels disappeared from Heaven and appeared on the "side of the Pit". At that moment, to all, God became an absolute known.

Satan's desire to establish a new world order of angels in Heaven, with himself as absolute ruler, LORD GOD, can be found in the Hebrew scriptures and in the teachings of Jesus; where Jesus comes down from Heaven to educate the fallen angels about this evil world, the soul of 'good & evil' inside every man, woman and child, and especially about Satan, the god and ruler of this evil world (read 1John 3:8).

Just as Jesus knew Judas would betray him (John 6:64), so did God know from the beginning that Satan and one-third of the angels would rebel . . . and thus the Bottomless Pit was waiting.

Reading the first verse in the nineth chapter of the book of Revelation in the King (Prince) Jame's Bible, "Then the fifth angel sounded: 'I saw a star (angel) from heaven - which had fallen to earth - and the key (knowledge) of the Bottomless Pit was given to him". Below is a drawing of the Bottomless Pit and its key features to explore using the Esoteric secret. 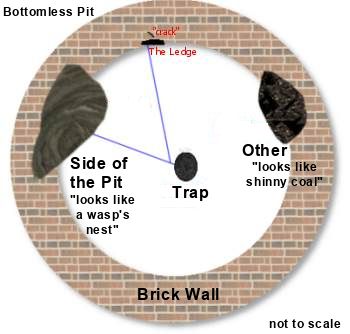 The wall of the Bottomless Pit appears as common reddish-brown house bricks. Located up on the wall of the Pit, just after exiting the Trap, is another 'ledge' from which one can see down into the Pit and observe the Trap, the side of the Pit, and the Other; then turn around and face the wall and you will see a 'crack' in the wall, through which you can pass through - rise up - and see the whole outside of the Bottomless Pit, including the Kundalini Energy rising up and enulfing the Pit: high energy discharges entering opposites sides of the Pit, creating two different habitations.

While the drawing shows a bottom, it is the Kundalini Energy barrier that one sees, giving the appearance of being bottomless, the same energy barrier which prevents us from leaving through the top of the Pit. The fallen angels, including Satan, are 'bound' by this energy field, created by God; however, just as we are bound here in the physical but can travel virtually to all the areas in the Trap, so too can we leave the Bottomless Pit - "if we know how" - and visit Heaven, just as Satan is recorded in Job 1:67-7 as coming and going to Heaven (also read John 10:1).

This Kundalini Energy field is what Satan uses to create, sustain and operate the Trap. This is the same energy field Satan uses to deceive people with "great works and lying wonders", the false holy spirit. This Kundalini Energy is the power of Satan, and the secrets of which he gives to whomsoever he chooses, as much as he wishes them to understand; and he's certainly not going to tell anyone all his secrets. The creative ability of Satan is not of Life and Eternity, but of 'decay & death'. Reading Revelation 7:16 and 21:4, In God's world (Other Earth) there is no hunger, no thirst, no sunlight, no heat, no pain, no sorrow, no crying and no death.   "Where are you?